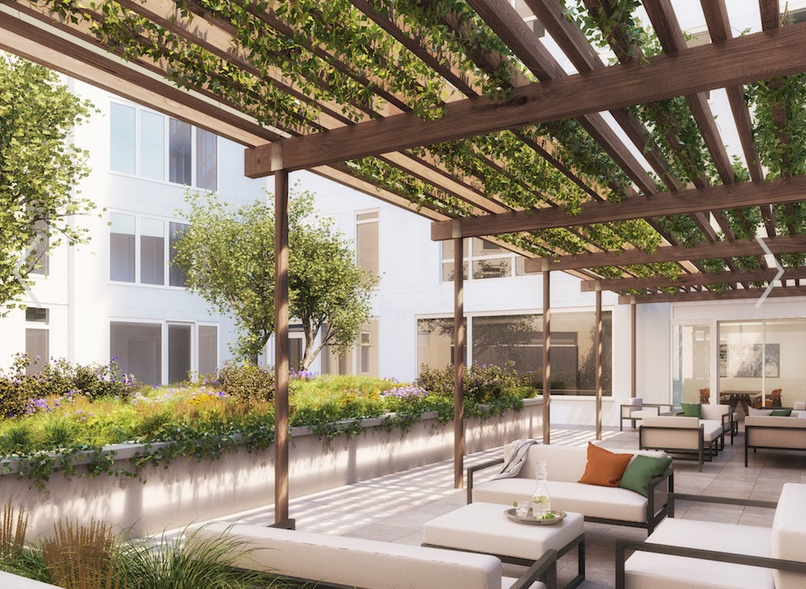 What Millennials Want: Homes Designed for Connection and Convenience

Miami to see uptick in luxury rentals, luxury developers bet big on the Dubai waterfront and more news from the around the globe

Onsite co-working spaces boasting coffee bars and Mac computers. Branded bikes, toy sailboats and takeaway picnic baskets, meant to be enjoyed on a Central Park outing. Access to a fun-filled courtyard, with ping-pong tables, fire pits and an adult treehouse. These are just some of the amenities that new luxury condominium and high-end rental buildings in major U.S. cities are including with a specific demographic in mind: well-to-do urban millennials.

These 19- to 35-year-olds are all about their lifestyle, experts say, which is part of why these amenities appeal to them. Many work from home, get around by bike, and put a big emphasis on experiences over possessions.

“They live very communally, they share a lot—both online and in person—and they’re very social,” said Dan McInerney, the vice president of Taconic Investment Partners, a Manhattan-based company that owns, operates, and develops commercial and residential real estate. “Creating a sense of community is very important to them.”

In addition to functional yet comfortable shared spaces that foster collaboration and connection, millennials are also all about convenience, said Maile Aguila, the senior vice president of South Florida-based Swire Properties. As a result, new high-end rental and condominium buildings being raised within massive, mixed-use developments, like Reach and Rise in Miami’s Brickell City Centre and the residences in Los Angeles’ Playa Vista development, are also a good fit for this group.

Mansion Global is now on LinkedIn. Join the discussion.

“This is the ultimate place to live, work, eat and play,” Ms. Aguila said of Swire’s two 43-story Brickell buildings, which are connected to a cinema and WeWork office space, and are in a development that will include a wine bar, restaurants, and high-end retailers like Saks Fifth Avenue. “You can eat, you can drink and you can shop, and all you have to do is come downstairs.”

But while a convenient location and enticing amenities were once enough, that’s no longer the case, experts say.

“Anybody can put amenities in a building,” said Andrew Barrocas, the CEO and founder of Brooklyn-based real estate brokerage MNS, “but if they’re not programmed correctly, they’re not of any value, and can actually be detrimental to a building.”

Mr. McInerney agreed, noting that this interest in programming likely came from the success of concierge services that could handle things like dinner reservations and theater tickets.

“The millennial group is experience-driven,” he said. “They like to seek out adventure and gain additional knowledge, and if they can do something in the building that they would otherwise have had to travel all over the city to find, it’s much more convenient.”

At MiMA, a high-end, 500-unit rental building in Manhattan’s Hell’s Kitchen, Chris Schmidt, the vice president of Related Properties who oversees the building’s leasing, said about 35% of residents are millennials. Programming in the building includes an outdoor summer movie series, regular dog-friendly “yappy” hours, and a building basketball league, which plays its games on a full-size, indoor court. “This sense of community and wealth of amenities is critical,” he said.
Other buildings hold group yoga classes, host book clubs or cooking classes and lead wine tastings. And at YOO on the Park, a 245-unit rental building set to open in Atlanta later this month, there will be an on-staff lifestyle director—a modern day Julie from “The Love Boat,” said Scott Leventhal, the president and CEO of development firm The Trillist Companies, noting that most millennials won’t get that reference.

MORE: Farm-to-Apartment Amenities on the Rise

Mr. Leventhal envisions that this certified fitness instructor will lead group exercise classes in nearby Piedmont Park, organize outdoor adult scavenger hunts in the area and generally promote social engagement for the residents as a “next-level amenity.”

In addition to programming shared spaces with a social-focused tenant in mind, the design aesthetic within them has also gone through a recent transformation, said Karen Asprea, the director of Manhattan-based design firm Whitehall Interiors.

“We’re designing more for community experience,” Ms. Asprea said, which has meant as much open space as possible, with fluid transitions between the library, the lounge and the kids’ playroom, plus long communal tables in work spaces and large demo kitchens in party rooms.

“The whole shift is about how people are using the spaces,” Ms. Asprea said, “and about being comfortable.”

While these types of amenities and updates have grown increasingly popular in luxury developments with condos priced between roughly $1 and $8 million and rental units that cost up to $10,000 per month, it’s important to note that millennials aren’t the only ones benefitting, as many of the buyers and renters in these buildings are much older.

MORE: London’s Luxury Rentals Are on the Rise

“The focus is really on people with social and active lifestyles,” said Anna Zarro, senior vice president of sales and leasing at Extell Development Company, which is raising the One Manhattan Square building, home to the adult treehouse and other fun features. People buying units in that building will include not only millennials, but also foreign buyers and locals who live in the tri-state area and are purchasing a city pied-a-terre, Ms. Zarro said, adding that, “meaningful socialization within a community building can be enjoyed by many types of purchasers and tenants.”

Here’s a look at other news from around the world compiled by Mansion Global:

Private Homes Prices in Singapore Continued to Drop in 2016, But May Stabilize

The price of private homes in Singapore fell for the 13th consecutive quarter at the end of 2016, with an estimated 3% overall drop for the year, and a 0.15% drop for Housing and Development Board resale prices, according to government estimates. Experts are  optimistic that the area’s market is stabilizing, even though it’s not likely headed for a major upswing. Prices in 2016 fell at slower rates than in 2015, and developers are expected to be able to maintain prices, while the perception of a bottoming market may drive buyers back into action. On the flip side, JLL national director of research and consultancy Ong Teck Hui told the Business Times, “Rising interest rates and expected slow economic growth in 2017 will, however, be an impediment to a quick turnaround in the market.” (Business Times)

A recent slump in condo sales and hesitation from foreign buyers has led Miami developers to turn their attentions toward the city’s rental market, meaning that 2017 will be the first year in which more new rentals than condos are expected to hit the market. According to the Downtown Development Authority’s Greater Downtown Miami Residential Market Study “Flash Report,” 3,575 new rental units will be delivered this year, compared to 2,774 condo units. The flood of inventory is expected to put downward pressure on the city’s rental prices, following the third straight year of record deliveries. (The Real Deal Miami)

In Response to Housing Shortage, Britain Will Build 17 New Towns and Villages

The British government announced plans this week to build 17 new “garden” communities with up to 200,000 new homes throughout the English countryside, as part of a larger response to the nation’s widespread housing shortage. The government has consulted with local authorities to loosen building restrictions and allow for the creation of new housing on so-called “greenbelt” land, following a plan first espoused in the 19th century wherein population overflow is housed in self-contained rural towns. The government is allocating £7.4 million to help fund the projects, including three newly announced towns near Aylesbury, Taunton, and Harlow, which will include 10,000 new homes apiece. (Reuters)

Home prices in China are expected to rise 4.1% in 2017 from 2016, while growth in property investment is projected to increase 5.4%, according to a state-owned newspaper. Wild spurts in China’s property prices have fueled concerns of asset bubbles, particularly in the country’s bigger cities. Average home prices across China will rise to CNY 7,435 per square meter, and property investment would total CNY 10.6 trillion. But the report predicted that the property market would face challenges in 2017, as monetary policy tightens on top of restrictive housing policies introduced last year. The report predicted growth in total home sales would slow to 5.3% this year, with sales by floor area rising just 1.1% to 1.3 billion square meters. New construction starts in real estate are also expected to rise 6.2%. (Reuters)

China’s continued real estate frenzy was also reflected in land auction prices last year, with the nation’s top-10 cities seeing an overall jump of 35%, earning a total of CNY 1.24 trillion. Nanjing beat out nearby Shanghai for the largest gains, with land sales revenue spiking a full 100%, up to CNY 177 billion. Shanghai saw CNY 162 billion in land sales, a 3% drop, while Beijing land sales dropped 57%, to CNY 85.2 billion. “With prices rising too high in first-tier cities, many developers have now shifted their focus to buying land in second-tier cities,” explained Yan Yuejin of the E-house China R&D Institute. Other top cities for land sales were Hangzhou, Suzhou and Tianjin. (South China Morning Post)

An Arizona Ranch Once Owned By the Wrigley family Is Asking $15.2 million

The 173-acre El Rojo Grande Ranch in Sedona, Arizona, is being marketed as a “fully appointed equestrian estate,” with an asking price of $15.2 million. The property, which was once owned by the Wrigley family, who made their fortune in chewing gum,  partially borders a National Forest, and includes a 6,700 Southwestern-style residence, in addition to a guest house and caretaker’s quarters. In fact, 159.3 of the 173 acres are untouched, and the listing notes the potential to develop the unused land into “an equestrian-oriented residential community,” or to leave as-is. The property also features a lap pool, spa, gym, fully equipped horse barns, and various terraces and patios that are set up for entertaining. (Architectural Digest)

Luxury Developers in Dubai Bet Big on the Waterfront

The revival of Dubai’s luxury real estate market is expected to continue apace in the coming year, particularly along a stretch of waterfront that’s seeing a boom in development. “The stretch will create different price points at the luxury end of the marketplace,” said Niraj Masand of property services firm Banke. “There are a limited number of plots directly overlooking the water and selling prices will also be determined by how close they are to the sea on the Jumeirah side.” The developments—which start at (Dubai) Creek Harbor, move through the Water Canal, and end at Dubai Harbor—are expected to be more resilient to market shifts than similar waterfront projects that were scrapped post-2009, thanks to a more diverse mix of retail and housing products. (Gulf News)

After Brisk Year, December Saw a Dip in Demand for Australian Cities

The latest Property Demand Index from Australia’s REA Group shows a slowdown at the tail end of a booming 2016 market, which may be a harbinger of slower growth in the new year. Victoria saw the steepest drop, with an overall yearly growth of 16.2%, but an 8.6% drop in December. Nationally, the average decline in demand for December was 6.6%, a trend industry insiders tie to higher interest rates and decreased affordability. “While still early into the New Year, the easing of demand nationally suggests that the record price rises we saw in Sydney and Melbourne last year are likely to be more subdued as we move further into 2017,” said REA Group economist Nerida Conisbee. (news.com.au)